British author J. G. Ballard was born in Shanghai in 1930. After the invasion of Pearl Harbor, his family was detained in a concentration camp for foreigners until 1946, when they returned to England. His first novel, The Drowned World, published in 1962, and its ensuing speculative novels, The Burning World (1964), afterwards published as The Drought  in 1965, and The Crystal World (1966), define his literary style, which has been dubbed Ballardian, of ‘dystopian modernity’.

He summarizes his experience of life in a Chinese concentration camp in Empire of the Sun (1984), which has won many awards, including the Black Memorial Prize and Booker Prize, and adapted for film by Steven Spielberg, and published its continuation, The Kindness of Women, in 1991. His postmodern novel The Atrocity Exhibition (1970) has been compared to W. S. Boroughs’ novels, and his ‘extremely controversial’ Crash (1973) has been adapted for film by David Cronenberg and High Rise (1975) by Ben Wheatley. 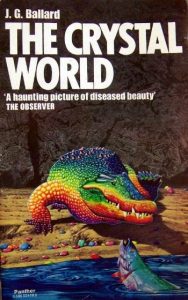