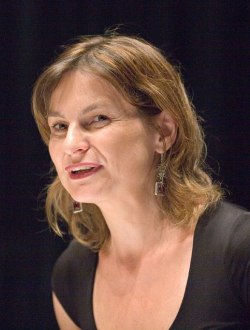 Radka Denemarková, born 1968, a Czech novelist, dramatist, screenwriter, essayist, translator of German literature, and creative writing teacher, is the only Czech writer who has received Magnesia Litera Prize four times (in different categories – for prose, non-fiction, translation and Book of the Year 2019).

She studied German and Czech philology at the Faculty of Arts of Charles University, gaining her doctorate in 1997. She worked as a researcher at the Institute for Czech Literature of the Academy of Sciences of the Czech Republic and was dramatic advisor at the Divadlo Na zábradlí theatre in Prague. She has been freelance since 2004.

She is the author of a monograph about theatre and film director Evald Schorm Being My Own Enemy (1998), Remembering Milena Honzíková (2003; in: Dopis zmizelému / Letter to the One Who Disappeared) and is the editor of the anthology Zlatá šedesátá / The Golden Sixties (2000). Her debut work of fiction The Devil by the Nose was published in 2005, followed a year later by the novel Money from Hitler, winner of the prestigious Magnesia Litera Prize for the year’s best work of prose. The Polish edition of the latter work was nominated for the Angelus Prize (2009), while the German edition Ein herrlicher Flecken Erde (DVA 2011) won the Usedom Prize for Literature (2011) and Georg Dehio Prize (2012). For the monograph Death, Thou Shall Not Be Afraid: The Story of Petr Lébl (2008) she won a Magnesia Litera for the year’s best work of non-fiction. In 2010 the Divadlo Na zábradlí theatre produced her play Sleeping Disorders. For her rendering of Nobel Prize winner Herta Müller’s Atemschaukel (Czech title: Rozhoupaný dech), Radka Denemarková won the 2011 Magnesia Litera for translation of the year. Her double novel Kobold: An Abundance of Tenderness / An Abundance of People was published in 2011. In autumn 2014 she published a novel A Contribution to History of Joy. Her book US 2 (2014) was filmed (directed by Slobodanka Radun, premiered 2014). For her latest novel Hours of Lead (2018) Denemarková won the Magnesia Litera Prize in the category Book of the Year. In 2019, she was awarded a Swiss Spycher Literaturpreis Leuk for her novel A Contribution to the History of Joy.

Radka Denemarková’s works have been translated into 23 languages.

She lives in Prague with daughter Ester and son Jan.
Outstanding awards and distinctions 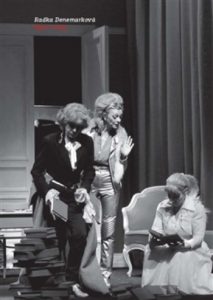