An anthology by a renowned Polish science fiction writer, containing eight stories set in a technologically advanced future where humankind wanders through the vastness of space.

The short story collection In the Land of Unbelievers contains eight anthologised tales by Jacek Dukaj, one of the most esteemed representatives of contemporary Polish science fiction and fantasy. His prose bursts with radical ideas, concepts, models of future and alternative worlds, and last but not least, linguistic ingenuities and neologisms. Yet the author combines the genre’s classic thematic underpinnings, such as technological development, virtual reality, and artificial intelligence, with questions of metaphysics, ontology, and ethics, of human origins, beginnings and endings, all the world’s being and doing. If Dukaj’s vision is predominantly a gloomy one, this is because it mirrors our present, transposing it into the experimental conditions of fictional worlds. The only constant is human nature, which endures, unchanging, through the vicissitudes of time and place. Yet these advanced technological realities also contain within them the threatening, the mysterious, and the unpredictable, as if drawn directly from the depths of prehistoric myth or the unconscious.

In a world where the role of science has been supplanted by magic, an empire wages centuries-long wars against the barbarians that threaten its borders, while an amoral lust for power inevitably leads to betrayal (The Iron General). In a hostile marshland in the midst of uncharted space, interpersonal relations between humans and their dreamed-up creations, including a Native American game-tracker, deteriorate despite the initial promise of a brighter future, while a liberated woman, a leader, finds herself demoted to the historical roles of wife and mother (IACTE). On a newly discovered planet, ruthless human exploiters encounter the ghost magic of yet-unrealised beings from the future (Flykiller). A group of space conquerors finds themselves on a parallel Earth where Jesus Christ, who did not die on the cross, has brought about a civilisation marked by boundless love, which presents the newcomers with the greatest ordeal imaginable (Christ’s Earth). Against the backdrop of local conflicts in Africa, a wealthy Western entrepreneur predicts and attempts to intercept a divine revelation, yet the rules of the game are unexpectedly altered by the actual coming of Christ (Medjugorje). Literary characters bump up against their ambiguous ontological status and yearn for evidence of their humanity, such as in the context of a computer game (Irrehaare) or upon encountering their “creator” (IACTE), whilst an artwork growing in the middle of a planetary wasteland interrogates the role of the artist as demiurge (The Cathedral). In the titular novella In Partibus Infidelium, a short history of space conquest through the means of evangelism, humanity encounters the representatives of alien species, yet it turns out to be impossible to determine the boundaries of their recognition – for what is the exact point at which life is imbued with a soul?

The power of visions, piled-up, fully overexposed ideas, surprising conclusions – the reader will find it all in In the Land of Unbelievers. It is a literature of an idea, without leniency, often complex and difficult to read, but it guarantees both secrecy and consistency in drawing conclusions, and broadening horizons, as much technological, psychological as theological.

In science-fiction, as in other literary genres, there are authors the record-players and authors the conductors; those who re-create and those who create. The former shamelessly keep on playing the same tunes, the latter will not rest until they have invented a new tune. Brimming with the wildest of ideas, they are the predators of literature and – unlike slow-moving ruminants – its driving force. [...] This elite group has been joined by Jacek Dukaj, whose perhaps greatest strength lies in his talent for coming up with ideas nobody else has thought about. And in the field as thoroughly ploughed as science-fiction, fresh and original ideas are bordering on the miraculous. 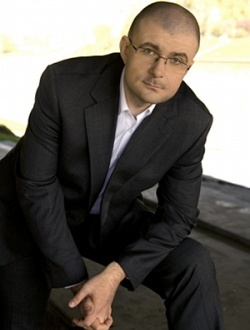 Jacek Dukaj, born 1974, is today’s most distinguished Polish science-fiction writer, a successor of Stanisław Lem. He studied philosophy at the Jagiellonian University. The European Union Prize for Literature (2009) shows that the merit of his work transcends a narrowly defined genre. His short stories have been translated into English, Russian, Czech, Hungarian, Italian, Slovak, Ukrainian, Slovenian and Macedonian.

He is known for the complexity of his books, and it is often said that a single Dukaj’s short story contains more ideas than many other writers put into their books in their lifetime. Popular themes in his works include the technological singularity, nanotechnology, and virtual reality, and his books are thus often classified as hard science fiction. Among his favourite writers is Australian writer Greg Egan, and Dukaj's books bear some resemblance to Egan's, or to the likes of Neal Stephenson's, although his stylistic brio makes him as much a ‘literary’ as a ‘hard science fiction’ writer - allowing for comparisons with the books of Thomas Pynchon or David Mitchell.