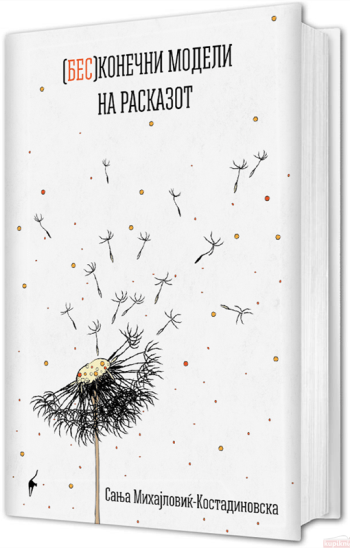 This dense, picturesque prose, which at times shades over into aphorism, offers an exciting view of a different kind of narrative that will doubtlessly stimulate readers’ imaginations.

Skopje-based publisher Begemot, which published Sanja Mihajlovik-Kostadinovska’s prose collection (In)Finite Models of the Short Story, has done much to encourage the originality and creativity of the form in the Macedonian literary landscape. Since 2016, Begemot has run a short-fiction and microfiction open-call, Estrangements (Очудувања), as well as putting out an eponymous edited volume collecting the best contributions according to their originality of style, narrative structure, and thematic ingenuity. The title of course recalls Viktor Shklovsky’s term остранение, and as editor Andrej Jovančevski writes in the preface to the first (twin) edition of Estrangements, evokes the boundless nature of narrative structures that, with their fresh and unusual takes on the form, elicit wonder from the reader. The edition includes works by Sanja Mihajlovik-Kostadinovska and it is thus no wonder that her first short story collection was soon to follow.

The very title of the collection, along with the titles of its sections (Deli Stories, Irritating Stories, Sad Stories…) and individual stories (Čevapčiči with Onion, An Eyelash in an Eye, Sagging Breasts…), often no longer than a single page, clearly expresses the author’s imaginative and playful writing style. The book contains fictionalised models of short stories as parodic instruction manuals, guidelines and recipes for the writing and reading of this literary genre, which resemble witty justifications for the similarity between a story and an unexpected, often banal object – as for example in the story Paperclip: “this is a type of short story you can use to hold your thoughts together, so they don’t go all over the place”. It is precisely the comprehensiveness of these comparisons that produces a humorous, at times even sarcastic effect, when they become reminiscent of extracts from literary criticism, as in Aquarium Fish: “they say you have begun to repeat yourself, that you are going in circles.”

This dense, picturesque prose, which at times shades over into aphorism, offers an exciting view of a different kind of narrative that will doubtlessly stimulate readers’ imaginations.

And in general, all short, simple stories have multi-layered, condensed meanings. That is why this collection resembles a pocket encyclopaedia of prose miniatures, and a micro-museum of short stories, models and sculptures.

Missing: a short story. Goes by the name of Mime Sis. Very sweet and fearful. If you see it, lure it onto a sheet of paper. Or report it to your nearest fiction station. 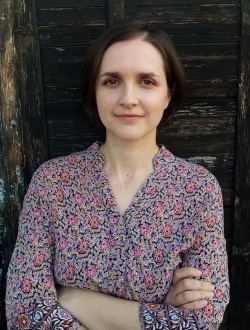 Sanja Mihailovik-Kostadinovska, born 1982 in Skopje, Assistant Professor of Spanish Literature at the Department of Romance Languages and Literatures at the Blaze Koneski Faculty of Philology, Ss. Cyril and Methodius University in Skopje, gained her PhD at Complutense University of Madrid. She has long dabbled in amateur dramatics, directing, translating, writing and adapting scripts. She has won several awards for short stories and Templum’s award for best debut novel in 2015 for 517. 517, a short dystopian novel set in a timeless society where everything is organized according to presentism, tells the story of a small group of young men and women putting together the pieces of their forgotten memories to bring back the normal flow of time. (In)Finite Models of the Short Story (2018), her first collection of short stories, among the most widely read works published by Begemot, is composed of short metafictional stories seeking stories in almost everything, even the most trivial everyday things, so we can comprehend the infinity of fictional models regardless of imagination‘s limitations. She also published a children’s book Sleepyhead (2019).

She has participated in several prose festivals, and her short stories have been published in literary magazines and anthologies in their original Macedonian, Serbian, English and Spanish. Her translations include Gonzalo Torrente Ballester’s Don Juan, María Teresa Andruetto’s Stefano, as well as poems, and excerpts from plays in anthologies of Macedonian literature in Spanish. She is an active member of the Macedonian Association of Translators and Interpreters (MATA).