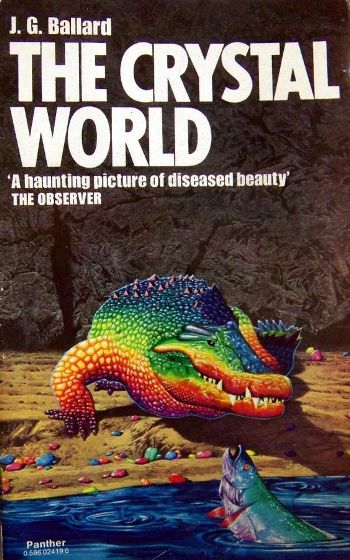 Ballard's dystopian journey through a glittering, astonishing world that crystallises upon being touched, whose beauty is deadly and monstrous yet simultaneously breathtaking.

Edward Sanders, an English doctor, travels to the fictitious republic of Cameroon, governed by the French army, to seek out a jungle clinic run by his friends, the Clairs. The republic’s primary industry, diamond mining, is entirely controlled by European corporations. Upon arriving in Port Matarre, Sanders stumbles across a mysterious phenomenon – a form of virus, or vegetative plague, is transforming the local landscape, living beings, in fact, anything it touches, into crystal. The process appears to be unfolding with unusual speed; before long, other parts of the planet are affected. Whatever is crystallised enters into a state of hibernation. The only thing capable of slowing the process, at least to some extent, are jewels. Yet due to rampant exploitation and smuggling networks jewels have become increasingly rare and vertiginously expensive. The question of postcolonialism thus combines with that of dystopia – or perhaps the other way around – even as the reader treads the shaky ground of an ever-changing world of consciousness and form. Ballard plays with yet another scenario of apocalyptic catastrophe which humankind has caused with its merciless exploitation of natural resources. Ultimately, Mother Nature resists human intervention, destroying humankind in order to ensure its own survival and replenish its lifeforce.

Ballard’s symbolic narration of the African world can also be read as a metaphor of space and time. We are faced with the dilemma of what would occur if both time and space were to come to a seeming halt, and which values and skills would become the key to survival. In its absurd conviction that it is the pinnacle of creation, humankind often loses sight of the bigger picture: that in comparison with the entirety of space, Earth is but an insignificant particle of dust. Could it be that life on our planet is shaped by chance events occurring in the vastness of space, which humans are unable to perceive and comprehend let alone predict or guard against? Alongside its critique of calamitous (post)colonial relations, the novel thus tackles foundational questions of humanity and its fragile existence.

The Crystal World is an anti-journey, populated with slowed-down people and petrified animals – crocodiles choking on diamonds, blind snakes with glass eyes, men lurching through the undergrowth with feet becoming explosions of quartz, sticking to the floor. I read the book and sat on that beach crunching grains of sand between my toes. The sun on the water flashed in my eyes, and everything stopped.

By day fantastic birds fly through the petrified forest, and jeweled crocodiles glitter like heraldic salamanders on the banks of the crystalline river, and where by night the illuminated man races among the trees, his arms like golden cartwheels and his head like a spectral crown.

British author J. G. Ballard was born in Shanghai in 1930. After the invasion of Pearl Harbor, his family was detained in a concentration camp for foreigners until 1946, when they returned to England. His first novel, The Drowned World, published in 1962, and its ensuing speculative novels, The Burning World (1964), afterwards published as The Drought  in 1965, and The Crystal World (1966), define his literary style, which has been dubbed Ballardian, of ‘dystopian modernity’.

He summarizes his experience of life in a Chinese concentration camp in Empire of the Sun (1984), which has won many awards, including the Black Memorial Prize and Booker Prize, and adapted for film by Steven Spielberg, and published its continuation, The Kindness of Women, in 1991. His postmodern novel The Atrocity Exhibition (1970) has been compared to W. S. Boroughs’ novels, and his ‘extremely controversial’ Crash (1973) has been adapted for film by David Cronenberg and High Rise (1975) by Ben Wheatley.