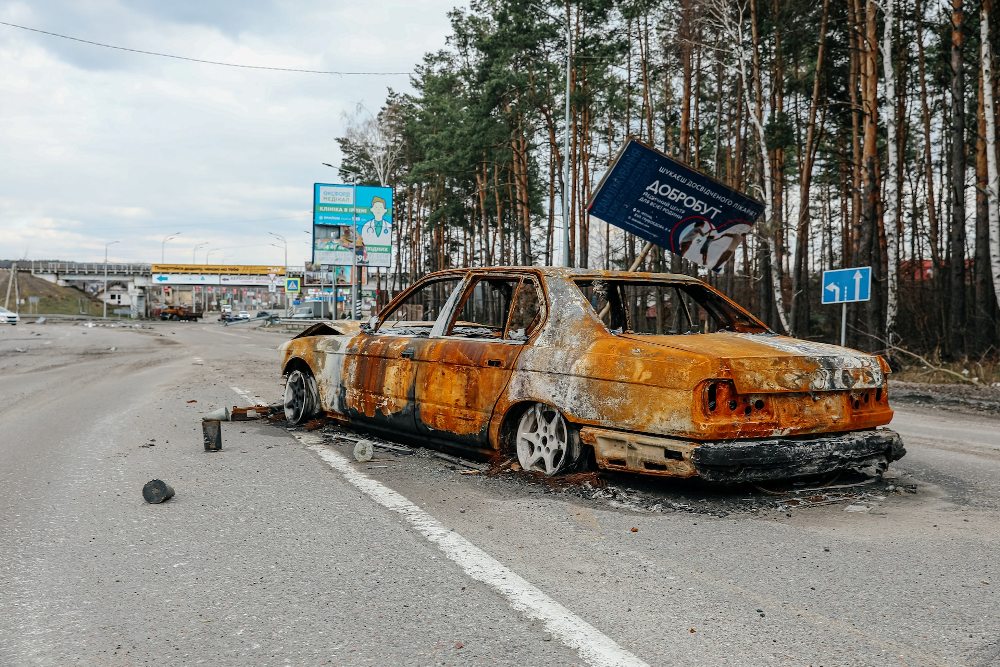 A few days ago, on 27 October 2022, the President of Guinea-Bissau, Umaro Sissoco Embaló, having travelled from Moscow to visit Kiev, offered to mediate peace negotiations with the Ukrainian President, Volodymyr Zelensky. This attempt to start peace negotiations between Ukraine and Russia was again categorically rejected by Ukraine and the USA. Since this is the umpteenth attempt at peace negotiations that has failed due to Western opposition, it is time to call a spade a spade.

Letter to fellow citizens of the European Union

Facebook does not allow for a real debate, because it apparently triggers a reflex to stick to one’s position. But for me, it is not about proving myself right; I would like to draw attention to a serious problem that we must be aware of: the West is committing a CRIME AGAINST HUMANITY by preventing Ukraine from holding peace talks, delivering new arms shipments, and therefore unnecessarily prolonging a war in which people are dying in large numbers. Slovenia, by virtue of its membership of NATO, is automatically complicit in this crime.

Slovenian and European politicians and the mainstream media refuse to see reality and face the truth: they refuse to see Russia’s 8-year effort to enforce the Minsk 2 agreement, the suffering of the people of Donbass, the real reasons for Russia’s special military operation and, above all, the fact that the US coup d’état in Kiev in 2014 brought to power ultra-nationalists who, unfortunately, have all the hallmarks of neo-Nazis. (There is indisputable evidence for all of the above. See bellow.)

Slovenian and European politicians and media refuse to see that Russophobia is structurally identical to anti-Semitism – it is about promoting a collective hatred of Russians. This is our collective wrongdoing, and I must be clear about this as a citizen of the Republic of Slovenia and of the European Union: For me, this is unacceptable! At the same time, I must try to do something. This is not only my responsibility, but our responsibility: We must face the truth, however painful it may be.

Of course, I am not indifferent when I see how easily Slovenian and European politicians and media have accepted the Nazi ideology, propaganda and censorship imposed on us by the West. In doing so, they are acting not only against the people of Ukraine, but also against the people of their own countries.

I understand that this is a clever psychological manipulation of the war propaganda machine, but this cannot be an excuse. We must accept our responsibility and acknowledge our own culpability in the situation, and, as a next step, begin to work to right the wrongs that we have done – as individuals and as a collective.

I confess that in the spring I, too, fell for the war propaganda and even donated to buy bullet-proof vests for Ukrainian soldiers, so probably to buy weapons. Of course, it was not easy for me either to face the truth and the shame of having fallen for the lies of propaganda, but we MUST do it, otherwise we will allow what has been happening in Ukraine since 2014 – we must not allow Nazism to infiltrate our souls. Hatred has never done any good. On the contrary, hatred leads to violence, which has no end in sight.

I can understand that you are fighting for the good name of Ukraine, but you do not need to worry about that, because I know that there are many good and kind-hearted people in Ukraine. In short, just because I draw attention to the neo-Nazi regime in Kiev does not mean that I do not like Ukraine. On the contrary, I wish the people of Ukraine peace and prosperity, and above all, that they could be able to breathe under a government that actually cares about the well-being of the citizens of Ukraine, and not about the interests of foreign powers and the particular interests of elites.

I have no intention of changing your mind. I only ask that you take the time to educate yourself on the facts. Then let each one decide according to his/her own conscience, taking full responsibility for his/her decision.

I hope you understand what I have to say, even though Facebook does not allow you to read and listen in depth.

I wish the people of Ukraine all the best and, above all, peace.

Letter to fellow citizens of the Republic of Slovenia

Regarding war propaganda, I recommend that instead of focusing on opinions (i.e. words) that fuel Russophobia, we focus on facts (i.e. actions) – and that we focus on the facts here and now (historical grievances are a trap, because they are destroying the future of our children). Actions not words count!

Various commentators are looking for ‘proof’ why the Russians are the evil itself. But similar methods were used by the Nazis with regard to the Jews! It gives me the creeps! We know about the Holocaust and the Nazi ‘death factories’ – concentration camps where not only Jews died in large numbers, but also Roma, Slavs and other peoples, political opponents and others whom the Nazi regime wanted to get rid of under various propaganda slogans!

People who participate in this kind of incitement to collective hatred are participating in a crime against humanity. Indeed, as you probably know, incitement to hatred against any group – ethnic, religious or otherwise – is forbidden under the Geneva Convention.

To illustrate: what is happening now is roughly the same as believing the propaganda that, for example, all Americans are the evil itself and that, therefore, the United States must be destroyed and all Americans must be killed. I have noticed that Americans are quite strange (read: different from Slovenians), but why should I hate them and wish them dead?! I will not do that to myself, because hatred kills creativity and the human soul!

Dear fellow citizens, I sincerely hope that you are not completely trapped and that you will be able to climb out of this trap. When war breaks out anywhere, it is the duty of the international community to put all its strength into the efforts for PEACE – that is to say, to make sure that both sides come to the negotiating table as soon as possible, so that the war ends as soon as possible. Anyone who deliberately prolongs the war and consequently endangers people’s lives by preventing peace negotiations is committing a crime against humanity. I believe that I am not the only one who refuses to participate in this crime.

Letter to the government of Ukraine

Dear government of the Republic of Ukraine!

If you want to improve the situation of Ukrainian language and culture, I suggest you encourage creative writing in Ukrainian, literary translation into Ukrainian, support Ukrainian culture and creativity! Isn’t this a better solution than passing laws that deny rights to national minorities (the Law on the State Language (2014), the Law on Education (2017), the Law on Indigenous Peoples (2021)) or blaming the language situation on others? Until 1991, Slovenians were also under the influence of other countries and the languages of the rulers. And yet (or maybe because of it) we were creating in Slovene. And we are doing it now. Every one of us who writes, translates, or sets up a cultural association or reading club, contributes his/her share to ensuring that our language and culture continue to develop and flourish. That is why, despite the inroads made by English, Slovene is still as alive and as vibrant as any language in the world.

I wish you from the bottom of my heart that peace comes to Ukraine soon.